The Grove is open for dine-in, pickup & delivery!

We endeavor to offer a personal neighborhood experience that’s comforting, engaging and a sensory delight. Proudly independent, husband-and-wife-owned and operated by San Franciscans.

Vibrant gathering places with busy sidewalk cafes, open early ’til late. American Comfort food with the fresh, healthy ingredients and sensibilities of Northern California, in an old California meets NYC atmosphere with our own travels thrown in – designed by us and with every item handpicked by us.

The music’s major… 10,000 songs from our personal library.

Each Grove is a mosaic of the things that we love and our life that we’ve tied together, where we were at creatively at the time it was built and what we thought fit with that specific neighborhood best. And each is a sibling with its own unique personality, built as if it was the last one we would do (because that’s what we always think!); guests each have their favorite, and that’s good!

Once upon a time, a boy named Kenneth was born. A 4th-generation New Yorker, his favorite things were food (Angelo’s pizza, Liebman’s pastrami, the Mister Softee ice cream truck and the hot dog cart right outside his apartment), music (guitar lessons at 8, concerts by Johnny Winter, The Rascals, and The Doors by 11), subway trips to Knick and Yankee games, skiing, and all things New York.

A few years later, 3000 miles away on the West Coast, a little girl was born named Anna, a 4th generation Californian. Anna’s favorite things growing up were trees, flowers, her pets, swimming, riding her bike and cherry pie. Rides in the back of her Papa’s pickup with her brothers and sisters through their family tree nursery and summer BBQ’s. She was a daydreamer always drawing things and re-decorating her room with a budget of $50.00 at age 8.

Each of an independent spirit, they did their share of traveling and enjoyed many of the foods and cultures the world had to share. 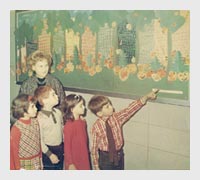 Things I bark for That’s their dog holding Ken’s Gretsch guitar, in a grove of trees like Anna grew up in.

The Road to Now

In 1995, their disparate backgrounds and common interests would intersect in San Francisco, when Ken opened his first restaurant, Zinzino, in the Marina neighborhood.

Ken hired Anna, who had her own design firm in SF’s North Beach. Through this first venture together their passions would only intensify to inform every aspect of what would later become The Groves. Anna and Ken’s life-long collaboration had begun.

The San Francisco Chronicle named Zinzino one of its “Top 100” restaurants saying “the best fennel salad I’ve ever had, the crispy calamari is among the best in the city, truly exceptional pizzas, with a dining room and outdoor patio that is reminiscent of a busy corner in Milan.”

Chestnut: Beginning Something Good Together

In 1999, Ken asked Anna to design The Grove, a small coffee shop he bought down Chestnut Street steps from Zinzino. He liked the name, location and little else – but he had a vision:

The DESIGN that is utterly unique and personal and layered and meaningful to people.

People are drawn in and don’t want to leave – enough said.

American comfort food, elevated. Every meat roasted in-house, every sauce made from scratch, fresh ripe oranges squeezed directly into the glass, every single thing done old school, the hard/ time-consuming, high-skill way. Anyone can find multiple things to fall in love with on The Grove menu.

The friendly STAFF that is old-school sweet and polite.

All about THE NEIGHBORHOOD

An experience like this, at reasonable prices, in a place with chalkboards. The Grove was “fast-casual” before the term existed, but with a personal touch to guests others often miss.

The Grove – Chestnut became a neighborhood anchor and institution, connecting with people in a deep way. Through Ken and Anna’s work together on the original Grove, their passions intensified to inform every aspect of what has become The Grove. Hey, What happened to Chestnut?

The Grove – Fillmore in the Pacific Heights neighborhood opened in 2002 in the heart of Fillmore Street, a few blocks from where Ken (and soon Anna) lived. Fillmore shared all of the soulful aspects of its older sibling, but has an eclectic unique feel all its own – the initial idea was “what if The Ramones moved into a barn?” though that soon got fleshed out in different directions! With Fillmore complete, Ken finally summoned the courage to ask Anna out. Ken and Anna were married in 2004. The Grove – Yerba Buena opened in 2010 where SOMA meets Union Square, a neighborhood they knew well from now living just blocks from there. It was designed as the “downtown” sibling without losing any of the signature elements that make a Grove. With 5 trees from the floor to the ceiling including 3 from the Grand Canyon, 140 seats inside and 40 outside, it often serves over a thousand guests in a day. The Grove – Hayes in the Hayes Valley neighborhood opened in 2011, next to where they forever loved to see concerts and events, hang out, shop, and eat – and still do. The Grove’s signature elements are at Hayes, but with some Morocco and St. Barth’s weaved in. The Grove – Design District, opened summer 2017, brings us full circle. First with Ken as client and Anna as professional Interior Designer, and then as partners, hundreds and hundreds of hours have been spent in the premiere showrooms located here in historic, beautiful brick and timber buildings. Filled with creative, artistic, talented people, and with new residential housing flowing in, The Grove is thrilled to join the neighborhood. With an old downtown LA meets a bit of Malibu and Tribeca interior, a patio with over 100 seats in the sun (when it’s out!) and an outdoor fireplace, private events space, the first Grove To-Go window, and more, well … come check it out. "The kind of place you go just to hang out and enjoy the fact you are in San Francisco."

“San Francisco's South of Market area is filled with high-technology start-ups. Yet The Grove has the opposite of a techie vibe. The restaurant is all timber: floors, walls, tables and benches. There's a fireplace and chimney that rise to the roof of the airy, two-story space. Kenneth Zankel, who co-owns The Grove with designer wife Anna Zankel says his wife designed the eatery to be “like the living room that we personally wish we had.” That atmosphere, combined with the American comfort-food menu has produced a daily out-the-door lunch line at The Grove.”

"With 200 year old barn floors and beams, the interior feels like a casual mountain lodge. Killer food: breakfast burrito, hot Cuban sandwich, frosty micro-brews, hearty mac and cheese (with four cheeses!), decadent desserts like organic fruit pies or huge cookies baked in-house hourly. The wooden tables inside are big enough to share with friends (or even friendly strangers) and chess and backgammon boards are available. Owner and music lover Ken Zankel plays selections from his collection. While you’re re-fueling or planning the next round of shopping, you needn’t interrupt your people-watching: The Grove has big front windows (wide open in fine weather) and sidewalk seating too.”

The 15 Best Breakfast Sandwiches in SF

The Grove Breakfast Sandwich at The Grove

"Once described as “San Francisco’s Living Room”, The Grove offers top rated catering services for its exceptionally good American comfort food. An independent and family-owned and operated establishment led by San Francisco residents, The Grove caters to any sort of special event and features a wealth of quality food items, including breakfast and lunch picnics for 8-10 guests, fresh organic salads and a variety of platters completed with utensils, plateware and napkins. Led by owners Kenneth Zankel and Anna Veyna Zankel, The Grove first opened in 1999 and offers four San Francisco locations – in the Design District, on the Fillmore, Yerba Buena near SFMOMA and at the beginning of Hayes Street Hill, near the War Memorial Opera House."

"Not just a restaurant but something much more personal. San Francisco-resident owned and operated. A gathering place where friendships, relationships, and businesses have blossomed. A zillion personal details and a ton of soul. A cornerstone of the neighborhood.The menu is comfortable from start to finish, just like the process of scratch cooking they tout. It stresses high quality, healthy ingredients."

Things I bark for:

The 15 Best Breakfast Sandwiches in SF

The Grove Breakfast Sandwich at The Grove

Thanks for your interest in working at The Grove! 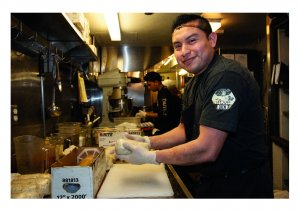 Are you enthusiastic, energetic, and engaging? Do you have a passion for great food and excellent service? Do you love music, especially the life-changing kind? Are you interested in continuous learning and self-improvement?

If this sounds like you, apply to become a Grove Crew Member now!

Work at The Grove Yerba Buena
We'd love to share occasional updates with you.
*If you would enjoy that, please just fill this in.
*We will never sell or rent your information to anyone, period!